Home > Guides > How to Get Cocaine Brick in Hitman 3

How to Get Cocaine Brick in Hitman 3 Some of the most exciting challenges in Hitman 3 do not involve taking an enemy target out. The Whiteout challenge takes place in Berlin during Apex Predator, and it consists in napping a brick of cocaine to cropdust both an entire crowd of ravers and an ICA agent. It’s one of the most popular challenges that players try to complete.

Hitman 3’s success can be attributed to its virtually endless playability, with challenges like the Whiteout challenge. They create more opportunities to go back to locations, replay certain scenes to win bonus points and rewards, and are arguably more exciting than the original 6-level gameplay.

What is the Whiteout Challenge in Hitman 3?

The Whiteout Challenge takes place in Berlin in Hitman 3. Agent 47 needs to locate Agent Chamberlain and cover him in cocaine to complete the challenge in this challenge.

Easier said than done. Agent 47 will first have to acquire the cocaine brick to throw it on Agent Chamberlain, and this needs to be done discreetly with the perfect timing to complete.

The ICA agent needs to be entirely covered in the white powder, after which it’s easier for Agent 47 to take him out. While it’s unnecessary to throw the cocaine brick on Agent Chamberlain to kill him, it completes the Whiteout Challenge and makes it more accessible.

But players get more than just a kick out of completing the Whiteout Challenge. You can earn significant XP by completing Whiteout, which boosts your mastery level.

How to Find the Cocaine Brick in Hitman 3

The tricky part about completing the Whiteout Challenge is finding the cocaine brick and after that, throwing it on to Agent Chamberlain takes considerably less skill and precision.

Here’s how to locate the brick: 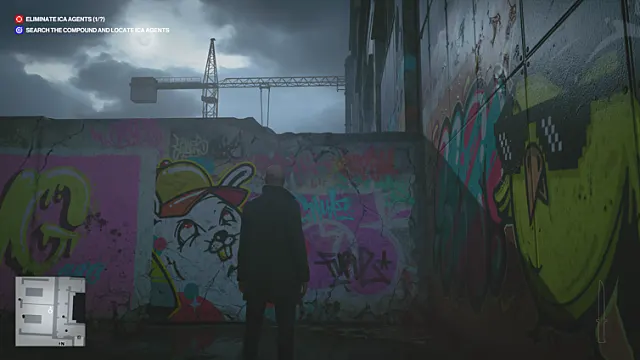 The second method can be shorter and more straightforward, but it has lower chances of success.

How to Complete the Whiteout Challenge in Hitman 3

Since you’ve gone through the trouble, you might as well finish the job. Agent Chamberlain doesn’t digest being sprayed with cocaine too well and rushes to the bathroom to throw up. Here’s your opportunity to drown him in his vomit and complete the hit.
And that’s it, you’ve located the Cocaine Brick and completed the Whiteout Challenge. If you’re looking for more fun Hitman 3 challenges, check out our guide on how to use the scrap sword.